Your Halloween drinks continue with beer, and specifically Pumpkin Ales!

We like pumpkin beers over here at S&C.  It’s like the fall season in a bottle.  They are typically mild, with an equal balance of bitterness and malt.  Some are made with actual pumpkins and some are made with flavors and spices akin to a pumpkin pie, such as nutmeg, clove, cinnamon, all spice.  The Beer Advocate says despite the incredible time consumption, the best ales use real pumpkin.  And, the folks over at Drink Craft Beer have rated their top ten faves.  S&C has had a few on the list, and we don’t think you can go wrong with the ones mentioned below.

So, if you don’t have time to whip up the Autumn Spiced Punch or the Corpse Reviver, No. 2, before the trick-or-treaters arrive, pick up a six pack! 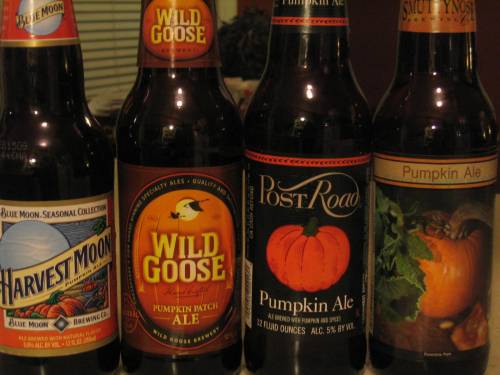 Not pictured, but also a very good beer — Punkin’ Ale, from our friends over at Dogfish Head.  It is a good beer when you’re heading into a cooler season.