Carol Hannah, Althea or Irina – who will be the winner? Can’t wait to find out. Check back for live updates (and opinions). Spoilers included, so watch out!

Congratulations to . . . Irina! I’m a bit surprised, honestly, that a color-free collection is the winner. I was more impressed with all of the collections than I expected to be.

And guess what – season seven premieres in just a couple of months!

Attention loyal S&C readers, Ms. S&C will be taking a few days off (actually, more like a week and a half), as she and Mr. S&C are headed to Prague! We’ve got our trusty Rick Steve’s guide and the New York Times’ 36 Hours column, so we’re ready to explore one of Europe’s most beautiful cities (at least that’s what we’re told). What will we do while we’re there? Well, we’ll visit some castles, drink some a lot of Czech beer, look at Art Nouveau, and you know — just holiday.

While she’s gone, there may be an occasional Tweet or two (no promises, though). But, you’ll be in good hands with Miss Mojito. Miss M will be *live* blogging the season finale of Project Runway, on Thursday, Nov. 19th, so be sure to check it out! Live blogging is fun.

Tagged S&C on the road

Shades of Fall and Aperol

Miss Mojito was excited to meet a new-to-her aperitif during Richmond Restaurant Week. Aperol is an Italian liqueur that sings strongly with both sweet and bitter notes. In particular, you’ll notice a strong orange flavor that’s tempered by hints of rhubarb and herbs.

I encountered Aperol in a fantastic cocktail called the Hummingbird at

Acacia Midtown (check out the fun presentation in the photo at right – I love the mini pitcher that accompanies the glass). Unfortunately, Miss Mojito was not the best reporter this particular evening, and so I’m blanking on ingredients. What I do recall is fresh pineapple juice. I’m thinking a mixture of Aperol, tequila, pineapple and agave might be right on the mark. But if you’re looking for something a bit less experimental, I might steer you in the direction of the Aperol Spritz, which I found over at the fantastic-but-soon-to-be-extinct-Gourmet.com.

Pour Aperol and Prosecco in a champagne flute and top with sparkling water. Garnish with lemon twist and serve.

Aperol is easily recognized by its distinctive, burnt orange color, and since that color is a harbinger of fall, I thought this would be the perfect opportun

ity to highlight some autumn-inspired shoes.

Posted on November 12, 2009 by msshoescocktails | 3 comments

I’ll start with the obvious — this has to be Robin’s week to go, right?

For the Quickfire Challenge — it is breakfast in bed with Padma and Nigella Lawson. Eli describes Nigella as a “modern, updated, less French version of Julia Child.” Kevin tells us that Gordon Ramsey named a turkey after her, so she is legit. I’ve always had a thing for Nigella — I think she is totally girl-crush-worthy.

Least favorite dishes: Bryan — Nigella couldn’t cope with vanilla and king crab in the same dish. Robin — she was a little too “one note.”

Favorite dishes: Kevin’s steak and eggs and Eli’s reuben benedict. Eil wins. There’s no immunity, but he gets a nod in the next Top Chef cookbook.

For the Elimination Challenge — Padma says they will celebrate the “crown jewels” of Las Vegas – the Strip. It goes something like this:

Michael Voltaggio says he will pay tribute to firefighters in his dish. Jennifer visits the “Tournament of Kings,” and says she has no clue what to do. Bryan Voltaggio visits the Shark Reef for inspiration, and buys his son a shark plush toy. I predict he is either going to rock it or go home this week.

I’m ignoring Robin. Kevin says a bunch of thoughtful sh*t about his take on food. Sounds like tropical oasis will be the focus of his dish. I love Kevin. Eli visits Circus Circus and appears to be confused. And, he’s kinda scaring me with his peanut, apple, popcorn soup.

Jennifer’s “sword and the stone” dish is not well received by Nigella. She says she is ready to be in “winch mode.” Yikes.

I don’t know why Robin even bothers to show her unusable sugar stained glass.

Micheal cooks a boneless chicken confit with a blue cheese dressing. Not sure about his firefighter connection, but the judge’s like it.

Toby says that Eli, like most people who come to Vegas, “has gambled and lost.” It sounds like Jennifer may be safe.

At the judge’s table — Kevin, Michael and Bryan are the top three. Michael wins with his fancy take on the buffalo chicken wing. 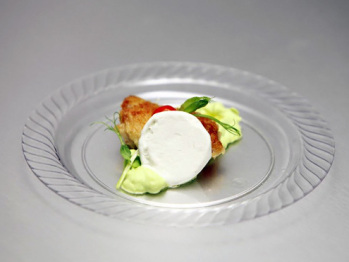 That leaves Jennifer, Robin and Eli on the bottom. Nigella says: Every part of Jennifer’s dish was disappointing;  panna cotta is “child’s play,” and Robin should have known how to make it; and finally, she would rather eat sawdust than Eli’s dish. I think I’m renaming this post “Nigella Says.” I could listen to her all night.

Wow. Robin does go. While I think she deserved to get the boot weeks ago, I’m not sure how Eli survived this round.

For the drink pairing — since Michael’s inspiration was New York, so

is ours. Brooklyn Brewery is one of our favorite beer makers. They have a great range of beers for you to fill your glass. Core brands include the brown ale, pilsner, pale ale, among others. Seasonal beers include their potent monster ale, black chocolate stout, oktoberfest, and more. Brooklyn Lager is their award-winning flagship beer. As with most lagers, it is versatile with food, and the fine balance of malt (for sweetness) and hops (for bitterness) make it a refreshing match for spicy chicken.

It was a dark and stormy night….Ms. S&C was busy preparing sweet potato skins (with bacon, marshmallows and molasses) for a friend’s annual Halloween bash. She kept watching the clock. The dish was looking good, but there was still a lot to do. And, what about a cocktail? There was no time! No time for simple syrups. No time for punches. She couldn’t show up empty-handed. She’s Ms. S&C! She didn’t want to disappoint. She spotted an almost-full bottle of Gosling’s Black Seal Rum in her cabinet (leftover from last year’s holiday party eggnog). She wondered if she could use it for something. What about the Dark ‘n’ Stormy? Yes, it is a Bermudan cocktail, but it has a spooky name…

Surprisingly, Ms. S&C has never tried a Dark ‘n’ Stormy before (rum is usually not her first choice of spirit). But, she’s heard good things. Read good things. And, she’s seen it on plenty a cocktail menu.

The zesty combination of the sweet rum and spicy ginger brew (only use the good stuff), and the easy breezy preparation — the Dark ‘n’ Stormy will undoubtedly have a regular spot in Ms. S&C’s cocktail rotation. Not to mention, it is great drink for any time of the year — a Bermuda bash or a Halloweeen fest — the ingredients are always available. And they’re always tasty.

Fill a collins glass with ice. Add 2 oz. rum. Top with half of a bottle of ginger beer. Garnish with lime wedge. Repeat.

The latest Project Runway episode brought back the remaining designers’ most successful outfits. The designers were charged with reinventing those outfits by creating a new, companion design. Creativity-wise, I thought most of the designs were lacking a bit in the inspiration department. Althea created another paper-bag-waist ensemble; Christopher went for drama with a heavy gown; Irina went for oversized glam; Carol Hannah put together yet another simple (but ridiculously cute) dress; and Logan and Gordana disappointed. Here’s a quick recap.

But back to the task at hand. Althea’s simple but sophisticated pants-tank-cardigan combo took t

op honors – and in my book, her shoes took top honors, too. The black pumps are almost tulip-shaped and are super-chic. But if I had my way, I might pair a pair from Nicole Richie’s new shoe line with this black, white and gray ensemble. The shoes won’t be available until January 2010, but we have this picture of an amazing, almost tribal platform sandal with ankle strap (above, left) to satiate us in the meantime. I think this funky sandal would totally liven up Althea’s outfit.

Posted on November 4, 2009 by msshoescocktails | 2 comments

Last week’s Top Chef episode was all about vegging out, in one way or another.

For the Quickfire Challenge, the cheftestants created a TV dinner, inspired by an iconic television show. Kevin won the challenge with his Soprano’s meatballs with polenta.

For the Elimination Challenge, the chefs created vegetarian dishes for guest judge Natalie Portman. Kevin, Michael Voltaggio and Eli were the faves. (Mike Isabella was not.) Kevin won again. And, Micheal Voltaggio came off looking like an ungracious jerk. Even Tom Colicchio thought so. Read his blog for great behind-the-scenes insights.

Kevin’s vegetarian dish reminded me a lot of Moosewood Cookbook‘s Warm Salad, which I make at least once or twice every winter — and, I drink

red wine with it every time. True, I drink red wine with most dinners, but I particularly love it with hearty kale and mushrooms. Since eco-friendly Natalie Portman was guest judge for this episode, and since October was Fair Trade Month, I’m going with the Fairhills Bus Stop Red for the drink pairing. I picked up a bottle at Whole Foods for less than $10. It was also highlighted on the Whole Foods blog, telling us that the wine is a product of one of the world’s largest Fair Trade projects, a joint venture between exporter, Origin Wine, Mendoza Vineyards in Argentina and Du Toitskloof Winery in South Africa.

The Fairhills Bus Stop Red is a dryish, medium bodied wine, with aromas of berry fruit and chocolate and hints of plum. Meatballs or kale, it should go great with either of Kevin’s dishes.

And, what makes the wine taste even better? Proceeds are dedicated to purchasing a school bus for the children of the over 800 farm employees and communities of San Martin, Lavalle and Medrano in Mendoza, Argentina.