the latest news in shoes and cocktails

Remember me? I’m Ms. Shoes & Cocktails. I used to blog more frequently about topics near and dear to my heart. While blogging inspiration inevitably ebbs and flows, I promise you this is just a small drought. It is summer after all.

If you are looking for some S&C-related reading material, can I recommend the following?

No longer preppy, the J.Crew look is now “a European in the United States.” 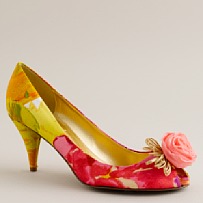 Here’s a great article from The New York Times Magazine about J.Crew’s new and improved transformation. It is now a brand that “twinkles with references to France and haute couture.” I also particularly enjoyed the description of their copywriting style as “distinctive J.Crew haikus.” A good example: these Raffia Rose Printed Peep Toes are described as, “Both sweet and sultry, these blushworthy peep toes ensure that summer romance isn’t just in the air but also on your feet.”

The Bloody Mary: nutritious and naughty, packed with vitamins and vice. A farm-to-table drink; a liquid salad.

The New York Times is the source of another fantastic article. This article by Frank Bruni, former restaurant critic for The Times, takes a look at how the Bloody Mary is changing for the better. How is it changing for the better? One restaurant in the East Village has a version called the “Chicago Matchbox,” and includes pickled Brussels sprouts, caper berries, white turnips, green beans and radishes. Also: some bartenders aren’t afraid to replace vodka as go-to spirit. Bruni goes on to say, “Tequila is perhaps vodka’s best bloody surrogate: its smokiness plays nicely with the flavor of tomato.”

I just want to go back to Paris.

Lastly, you want something that isn’t S&C related? Check out my new favorite blog, littlebrownpen. The author is a copywriter and photographer, and has the most beautiful photos of Paris I’ve ever seen. Seriously, I melt every time I look at them. I am so awestruck that I forget about all the places I’ve never visited, and I just want to go back to Paris. Check out this glorious sequence of Red and Green, and isn’t Violette a pretty word?

S&C alerts–brought to you from Oprah

A good friend of Ms. S&C’s, and one who is likely in the running for Oprah’s-biggest-fan-ever, recently passed on these S&C-related finds from the August 2009 issue of O magazine.  Ms. S&C thought she’d share, as she does love Oprah’s recommendations, for just about about everything. (In case you missed it, see the post on her “favorite things.”) 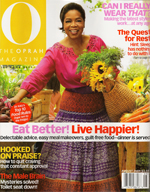 Shoe-related news:  SoleMates — No more heels sinking into the grass or falling into sidewalk cracks. These discreet, little plastic things attach to most heels, to give stability on grass and to keep you from destroying your heels on sidewalk cracks. They come in clear and black, and seem worth it for $10.00. I usually recommend wedges for grassy events, but I definitely need another solution for walking on brick sidewalks in this city. Read more in the O magazine feature.

Cocktail-related news: BYO Boxed Wine — Check out a new website where you can locate restos that allow you to bring your own wine (just enter your zip code). You’ll be surprised at the number of DC-area places. Only 10 regions are covered so far, but it was  highlighted in O, and that means you can expect that number to go up drastically.

And while you are at it, bringing your own wine and all, consider boxed wine as an option. Yes, I said it. Boxed wine. In higher demand because of its eco-friendly packaging and long shelf life, there’s a new wave of premium quality boxed wine available. For a weeknight supper, O magazine suggests the Black Box Sauvignon Blanc. Ms. S&C has tried the Black Box brand (Shiraz is good too), and highly recommends it. Trust me, this won’t be the last you’ve heard of boxed wine over here. Read more in the O magazine feature.

Here are some of Ms. S&C’s favorite finds in the worlds of shoes and cocktails.

New York Fashion Week was last week. I’m always a bit overwhelmed and underwhelmed by fashion weeks. There’s always so much coverage, and I never know what to read. Plus, there’s the whole never-in-my-lifetime-will-I-ever-afford-this-so-why-bother aspect. Well, I’m happy to report two things: 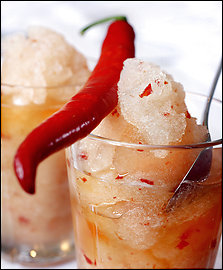 Chili Granita is definitely a contender for the S&C test kitchen. You can change the flavor depending on the chili pepper and spirit used. For example–for a smokier flavor, use chipotle peppers and single malt scotch; for something sweeter, use bourbon. The Whisky Chili Granita is described as something that could “wake up” guests after a long dinner. Cheers to that.

Posted on September 18, 2008 by msshoescocktails | 4 comments

Here’s our celebrity edition of shoes and cocktails news.

Spirits & Cocktails – I’ve got a bone to pick with Jason Wilson, Spirits columnist over at the Washington Post. When given the opportunity to reference “Gin & Juice,” Danny Devito drunk on limoncello, a teetotaling Donald Trump, and a drink called “Crunk Juice,” have some fun with it for crying out loud.

Yes, I agree that celebrities can endorse, design, and inspire some ridiculous sh#@. And, there is probably no chance in hell I’ll try Donald Trump’s vodka, or Snoop’s cognac (I just don’t like cognac all that much). But, I would consider Sammy Hagar’s tequila and Marilyn Manson’s absinthe. And, I won’t apologize for thinking those “Sex and the City” cocktails would actually taste good. Except maybe “The Charlotte” (who coincidentally is my least favorite SATC character). I’ve made similar variations of these drinks, and Campari and pomegranate juice is good.

Anyway Jason, don’t be such a buzz kill. And, when you’ve mastered your “palatable, sophisticated version of Crunk Juice,” let us know. In the meantime, friends, you can try out this version, courtesy of Drinkmixer.com.

Pour both ingredients into a cup or glass, stir slightly, and serve. 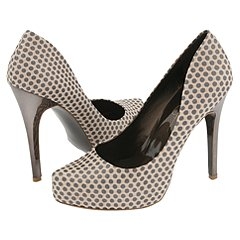 Shoes – It will come as no surprise that celebrities are shoe designers too. Kayne West revealed to Women’s Wear Daily in July that he plans to work with Louis Vuitton on a line of men’s shoes. They probably would have gone well with Cristal, until the company decided it was too good for hip-hop’s business. In other shoes, Miss Jessica Simpson has gotten some respect from Footwear News, for her line of shoes. Though awfully, awfully trendy, there are a few good finds, like these polka dots pumps sold at Zappos.

Posted on September 5, 2008 by msshoescocktails | 3 comments

These are the tenets of Slow Food, and the theme for this edition of shoes and cocktails news.

Cocktails – Jason Wilson, in his Spirits column in the Washington Post, recaps the “slow cocktails” found at the Slow Food Nation conference in San Francisco. Slow cocktails, like slow food, are prepared in a thoughtful way. Basically, you think about where your ingredients come from and how they are prepared. Slow cocktails are craft-oriented, made from artisan producers, and free of artificial ingredients. The spirits used in slow cocktails are not always organic, (because there currently isn’t enough organic grain to make mass quantities), but distilleries should be sustainable. An article from thekitchn.com highlights Slow Food USA’s chairman, Allen Katz’s slow spirit picks and one of his recipes.

Muddle blackberries in a mixing glass. Add remaining ingredients and shake over ice. Strain into a rocks glass filled with ice and garnish with two additional blackberries. 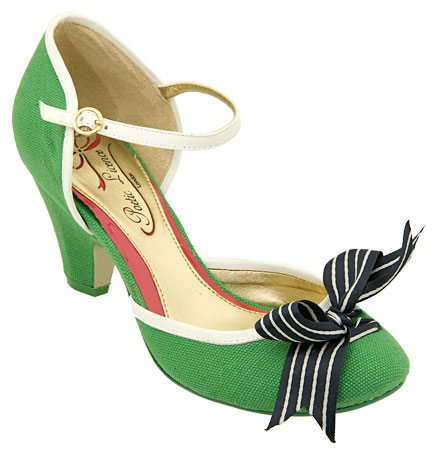 Shoes – Awhile back we highlighted Natalie Portman’s vegan footwear, Té Casan. Some less expensive options, to go with your slow cocktails, can be found over in Zappos eco-friendly section and at Planet Shoes, the place where you can find these adorable pumps from Poetic Licence.

We might as well call this edition the gentleman’s quarters. Below are some of my more masculine finds in shoes, cocktails, and things related.

Below are some of my latest finds in shoes, cocktails, and things related.

Posted on August 5, 2008 by msshoescocktails | 4 comments

Here are the latest headlines on shoes, cocktails, and things related.

Shoes & Cocktails wants to know: I’m thinking about adding an advice column to the blog. Readers can email with questions like: “How do I justify an exorbitant price tag on the shoes I love?” -or- “I’m hosting supper club, what cocktail do I serve, that all guests would like?” -or- “And, what shoes do I wear?” What do you think? If you’d like to see it, post a comment below.