Alright, so I know we’ve got A LOT of catching up to do on Top Chef. Our last recap/drink pairing was the holiday episode (!), so let’s review. 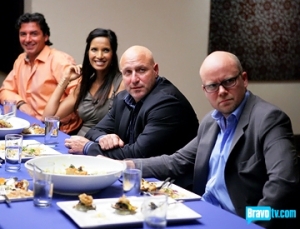 In episode seven, Toby Young, the hardass Brit, joined the judges’ gang and two cheftestants had to be eliminated. Immunity couldn’t have been more important this round. Radhika won the ultimate-sweet-treat-without-sugar Quickfire Challenge with her bread pudding. The Elimination Challenge allowed the chefs to cook whatever they wanted, because up ‘til now that haven’t been cooking anything great. Their dishes were served family style and they judged each other. Jamie won with her scallop dish and it was sweet redemption. Melissa and Eugene were sent home, and they’re already forgotten. Fabio, the mediocre but charming as hell chef, delivered another winner with “It is Top Chef, not top scallop,” when referring to Jamie’s dish. He makes us weak in the knees. And he knows it.

Episode eight brought back former Top Chef winner Hung for the Quickfire, and the cheftestants went down on the farm for the Elimination. Divided into teams of lamb, chicken and pork, the cheftestants used the fresh home-grown ingredients from Blue Hill Farm to make dinner. Carla, Jamie and Stefan, of Team Chicken, were the winners. Ariane was sent home and I was ticked. Leah is annoying. Even Tom Colicchio said in his blog, “The response to the elimination of Ariane was mammoth.”

The most recent episode was Restaurant Wars. The Quickfire started with a one dish tasting that represented each chef’s restaurant concept. Radhika and Leah were Stephen Starr‘s favorites so they were rewarded (or cursed) with being team leaders. Radhika chose Jamie, Carla and Jeff for her old spice trade style resto, Sahana. Leah chose Hosea, Fabio and was stuck with Stefan. Good lord, he is overbearing and arrogant – but, I also think he can cook. Not sure of the challenge count at this point, but I feel like he wins a lot, or is often in the top. Anyhoo, they delivered the Sunset Lounge as their Asian influenced resto.

Fast forward through romance drama between Leah and Hosea and Radhika’s weak leadership qualities. Sunset Lounge won by a hair and why? The Euro Duo. The charming and thoroughly self-aware Fabio was excellent in the front of the house, and the best dishes of the night were Stefan’s desserts. 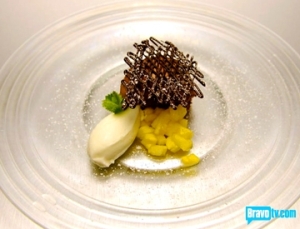 To pair with Stefan’s orange chocolate parfait and the ginger and lemongrass panna cotta, I offer the first dessert wine I ever tried. And, it was on a first date. While in college in Williamsburg, Va, Mr. S&C snuck a bottle of Essensia into a movie theater for us to enjoy. Made from 100% orange muscat, the wine is sweet yet refreshing, with a nice accompaniment of orange blossom and apricot aromas.

Shoes and Cocktails wants to know: Who’s your favorite cheftestant? Or, who is your pick to win? Share a comment below.