Milla Jovovich was the bright spot in last week’s Project Runway. She was insightful and smart, thoughtful and funny. She had a great rapport with Michael Kors. She even shed a tear over Nicolas. I want more Milla.

“If this was project-I-didn’t-mind-it, he would win.”
– Milla Jovovich on Logan’s very average design 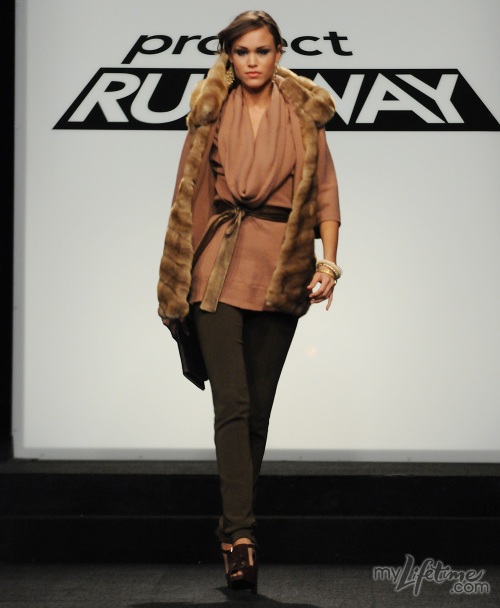 Irina’s Aspen design won. Yes, there was a little too much camel color, but it was definitely the most complete look. The ski-inspired pants, the open-back cowl neck sweater, the faux fur vest — all very sophisticated. Too bad her personality isn’t as warm as these clothes. But, no doubt she’ll be a finalist at Bryant Park.

For the shoe pairing, I love the Frye ‘Deborah’ Studded Ankle Boot. The distressed leather, embellished with sparkly beads and studs — the boots are Western yet urban. Considering Irina’s snow bunny would likely be drinking champagne at the lodge instead of on the slopes, it is reasonable to chose style over function in this circumstance.