The second episode of Top Chef was typical Vegas – dice rolling, shots, bachelor and bachelorette parties. They even threw in a battle of the sexes. Though the episode focused on men vs. women, it looks like the season is shaping up to be Voltaggio vs. Voltaggio.

The show started with the Quickfire Challenge, where the cheftestants rolled the dice and had to create a dish with the same number of ingredients (as shown on the dice). Michael V won with a nitro [liquid nitrogen] gazpacho, compressed cucumbers and toast point.

Both Voltaggio bros end up preparing the top two dishes of the Elimination Challenge. In the Elimination Challenge, it was men vs. women, and the chefs created dishes for a joint bachelor/bachelorette party, with the food complementing one of three shots: the Moscow Mule, tequila, and something called the Golden Delicious (which one chef described as sweet, gooey, and disgusting).

Michael V reworked the ingredients (fresh ingredients, of course) from the Golden Delicious, and made an apple and ginger sorbet with a goat cheese cookie. The judges loved it, but his big bro Bryan V won with his sweet and sour macaroon, filled with guacamole, corn nuts and corn puree, which he paired with tequila. His dish was a modern version of the all-time favorite Mexican appetizer — chips and guacamole. 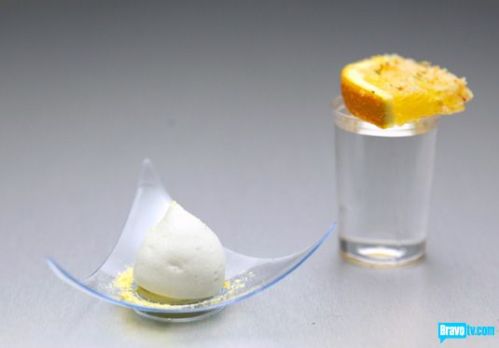 For the drink pairing, S&C is hot-to-trot over tequila lately. Recent blog posts have highlighted watermelon margaritas and a modified cantarito. We’ve also shared recipes for cranberry margaritas, the pink panther, and a Q-cumber fizz. Using the categories on the right-hand side, you can search for all blog posts featuring tequila.

Because Ms. S&C recently drank a great Paloma at Bar Pilar in DC, she’ll share a new tequila drink, to go with Bryan’s macaroon (otherwise, she may have picked Miss Mojito’s cantarito). The traditional Paloma drink is made with grapefruit soda (same as the one at Bar Pilar — and similar to the cantarito), but the below recipe uses freshly squeezed white grapefruit juice and club soda, to add fizz. It was featured in a great article on tequila, from the Washington Post’s spirits columnist, which was recapped by S&C last year.

Fill a cocktail shaker two-thirds full with ice and add the tequila, grapefruit juice, lime juice and agave nectar. Shake well and strain into an ice-filled collins glass rimmed with sea salt. Garnish with the lime wheel and top with a splash of club soda.

S&C is becoming a fan of Jason Wilson’s Spirits column in the Washington Post’s Food Section. This week, he gives us the low-down on misunderstood Tequila – and, as a bonus, we get some excellent drink recipes.

I’m sharing it here, because it is better than any research I could do on the liquor. Jason Wilson went on an agave pilgrimage, to see first-hand the life cycle of tequila’s base ingredient. He visited distilleries, sampled agave pulp – all to understand tequila’s complex characteristics. But, he also wants to refine tastes, and change drinkers’ perceptions of the spirit (i.e. those that think tequila is only good for the 21st birthday shot, it’s a low-quality liquor, and it should only be mixed with pre-made, sickly sweet bottled mixers).

Tequila isn’t quite as complex as wine, but there are geographical areas (Jalisco highlands and lowlands) to note, and there are three basic types to understand: blanco (pure), reposado (rested), and añejo (aged).

I’m far from an aficionado, but I whole heartedly support the notion that if you have good ingredients available, (a) use them, if resources allow, and (b) if you use them, do not, under any circumstances, drown them with overpowering, artificial mixers. I’m actually a bit of a snob when it comes this point. I promise you – you can make a better cocktail without those bottled mixers. And by better, I still mean easy, simple, and affordable. Take a look at these recipes: Paloma is more popular in Mexico than a margarita (grapefruit tastes better with tequila than lime); Sangrita is a spicy drink that literally translates “little blood,” and, the Tamarind Margarita is a sweet and spicy frozen drink. Sounds delicioso!