Posted on August 5, 2009 by msshoescocktails | 5 comments

Recent text message to Ms. S&C, from her younger brother:

“Hi. In Williamsburg [as in Williamsburg, Brooklyn]. You
remember Keds you wore way back when? Apparently
those are replacing Chucks amongst the hipster crowd…
Became too mainstream. Ha ha.”

Ms. S&C likes to tease her younger bro about being a hipster — mostly because he lives in Brooklyn, wears Chuck Taylors and skinny jeans, hangs with an artistic crowd, and insists that he’s not one. :-) Regardless, he was on to something when he spotted the Keds. They are popping up everywhere. And, I think I’m glad about it.

Footwear News covered the Keds comeback in an article earlier this week. FN says the company is going after the 24-year-old man and woman with new adaptations of the classic Champion style (there’s an organic label and options to customize them), and will push to get them into premium stores (i.e. Barneys). Keds’ President, Kristin Kohler Burrows, went on to say, “We really feel like that consumer is a large part of the reason why [the country] is in a more optimistic era now. They helped usher in the new president, and this collective spirit is what their generation represents, and that’s what Keds represents.” Ms. S&C would agree that is a worthy demographic to capitalize on. It also helps when celebrities like Kristen Stewart of Twilight fame and singer Katy Perry have been donning the styles.

But, whose to say Keds are just for the optimistic 24-year-old? Washington, DC’s new man-about-town, Rahm Emanuel, was spotted wearing them at the Woolly Mammoth theatre over the weekend. But, he’s a little bit hipster, no?

Have you spotted the latest trend? Share it with S&C! If you are out and about and run across something spectacular, inventive, or delicious — email shoesandcocktails(at)yahoo(dot)com, or find us on Twitter @shoescocktails.

Friends of S&C recently vacationed in Toronto, and visited a shoe museum. Yes, there’s a museum entirely devoted to shoes. And, why not?!?! The Bata Shoe Museum celebrates the style, function and history of footwear. There’s over 4,500 years of shoe history is on display. The museum’s collection ranges from Chinese bound foot shoes and ancient Egyptian sandals to chestnut-crushing clogs and glamourous platforms. In the “Footwear of Famous People” exhibit, you can see John Lennon’s “Beatle Boot” from the 1960’s, and Elton John’s platform boots circa 1973.

And how did Ms. S&C hear of her friends’ spectacular and surely stunning cultural experience? A good, old-fashioned postcard. Ms. S&C was practically euphoric when it arrived in the mail. 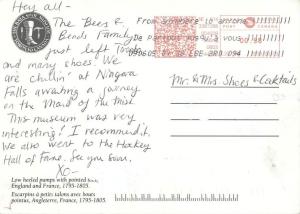 postcard from the Bata Shoe Museum in Toronto

Have you spotted something spectacular? Share it with S&C! If you are out and about and run across something awe-inspiring, inventive or delicious — email shoesandcocktails(at)yahoo(dot)com, or send us a TwitPic @shoescocktails. Or, a postcard!

A friend visited New York City over the weekend and came home sharing pictures of a pretty awesome shoe display. These pictures inspired moi to start a new feature on the blog where readers can share their discoveries. Ala The Sartorialist‘s coverage of people-on-the-streets, but S&C-related. For now we’ll call it S&C Spotted.

So, the first edition of S&C Spotted brings you a window display of vintage shoes, including a spectacular pair of rhinestone peep-toes from Valentino. Don’t you love how the dominos are playfully scattered about? Makes you want to head to Monte Carlo, no? These shoes may be vintage, but you’ll be seeing more of this sparkly trend.

The display was spotted at one of the Housing Works Thrift Shops. Housing Works operates seven upscale shops in New York City, selling high-end vintage treasures for good causes. Even if you’re not in NYC, you can shop their shoes online. Choose from designers like Gucci, Marc Jacobs and Ferragamo at insanely low prices. 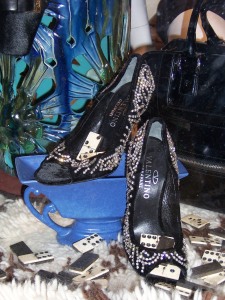 Have you spotted something spectacular? Share it with S&C! Camera phones are ubiquitous these days, so if you are out and about and run across something awe-inspiring, inventive or delicious — email shoesandcocktails(at)yahoo(dot)com, or send us a TwitPic @shoescocktails. We’d love it!