Ms. S&C was thrilled to accept an invitation from a friend to try out a new speakeasy-style cocktail establishment in DC. Ala PX in Old Town, this classy lounge also serves up extraordinary cocktails using the finest ingredients and super-innovative techniques (Jim Beam infused with curry, or flambéed egg whites, anyone?).

They are pretty serious about keeping the place hush-hush, so I won’t mention the name here (I want to be welcomed back). You can only get in if you have a reservation (thanks again Ana!), the location is rumored to change, and the place is only open two nights a week. The atmosphere is a throwback to the 1920s-prohibition era, with bartenders is vests and a black and white movie playing (Wife vs. Secretary last night). And, the drinks. Oh, the drinks!

The drink menu has three categories: Original, Borrowed, and Classics. Between the two of us, we made sure to try all of the originals, which included their own version of a Pimms Cup (Pimms 1.5), and a strangely smoky concoction using Del Maguey Minero mezcal (Los Rudos). Other originals included shout-outs to nearby cities – Baltimore Bengali and Philly Sling.

Another highlight was the bartender/mixologist Justin. He was a real cool guy with no pretension and eager to talk (and explain) each cocktail, which are quite labor intensive. Naturally, we became increasingly chatty after each cocktail, so we asked him how he would react if someone came and asked for a vodka tonic? His answer, “I don’t think we have any vodka here.” But, they do make their own tonic.

So, friends – no pictures of the bar, no pictures of the drinks – in hopes to preserve the mystique for awhile longer (and not get thrown out of the place). I leave you with this parting shot – our shoes! Taken at a pizza joint up the street, where we split a slice after indulging in some of the best cocktails in DC. 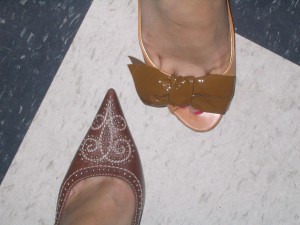 This entry was posted in cocktails and tagged good cocktails in DC, speakeasy-style. Bookmark the permalink.

One response to “Roaring cocktails”