Knives down, hands up

Posted on November 14, 2008 by msshoescocktails | 2 Comments

Top Chef has begun!  Season 5 brings the culinary contestants to New York City, which should make for some awesome challenges.  The first episode starts with 17 contestants, so I can hardly remember who’s who.  I know there’s a group of three two that call themselves “Team Rainbow.”  I think I’ll start calling the German and Italian dudes “Team Europe;” its clear they’ve bonded pretty well.  Then, there’s a faceboy I’ve named “Mr. Hair.”  And, other than our Washington, DC gal, I think everyone else is pretty much from New York or California.

The Quick Fire Challenge has the contestants peeling apples, chopping apples, and cooking with apples.  And then, just like that, we’re down to 16.  Lauren-with-the-overbearing-personality has to hop right back on the boat and head home.  Now, its time for the Elimination Challenge.  The remaining 16 go head-to-head and chose one of eight New York City ethnic neighborhoods to find inspiration for their next dish.  The neighborhoods include: 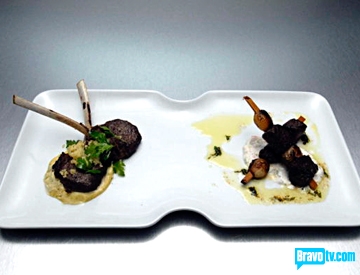 Stefan of “Team Europe” wins with his classic Middle Eastern fare, and Patrick of “Team Rainbow” loses with his clichéd Chinese dish.  Stefan served up a lamb chop with tabouli and beef skewers with caramelized onions and hummus.  Guest judge, Jean George Vongerichten, kept commenting on the great lemon flavor found in the dish.  While I would likely be drinking red wine with this meal, here’s a cocktail that may complement nicely.  Given that I love Lillet and lemon these days, and thyme being a natural accompaniment, I think it would pair well, or at least serve as a pretty good aperitif.

This drink is a Shoes & Cocktails exclusive!

Directions:
For the simple syrup, combine 1/2 cup water, 1/3 cup sugar, and a teaspoon of thyme in a saucepan.  Cover and simmer 10 minutes.  Strain spices from syrup.  Combine all ingredients and shake well.  Serve over ice.   Garnish with lemon twist and sprig of fresh thyme.

2 responses to “Knives down, hands up”