In the fifth episode of Top Chef, the cheftestants are teamed up to cook for Gail Simmons‘ very own bridal shower.  Gail’s friend, and Editor-in-Chief of Food & Wine, Dana Cowin is guest judge.

The episode starts, as always, with the Quickfire Challenge.  I think most fans of Top Chef really like the reoccurring taste-test challenge, where the chefs have to guess the name of ingredients in a blind taste-test.  This time the challenge was some kind-of disjointed head-to-head thing that I personally didn’t like as much.  Anyway, Hosea wins and gets immunity so you know he’s around for another week.

The Elimination Challenge is Gail’s bridal shower, where the cheftestants draw knives for the something Old, something New, something Borrowed, and something Blue teams.  The “old” team cooks classic foods such as tomato carpaccio and terrine.  The “new” team cooks a disastrous assemble-it-yourself not-sushi-sushi.  The “borrowed” team borrows the Indian heritage of a fellow cheftestant (Radhika), and the “blue” team uses the deep blue ocean for inspiration.  No big surprise that the “new” team is crucified and it is Danny who gets sent home.   He may have been okay if he didn’t insist it was a great dish after hearing everyone destroy it.  The winners are team “borrowed,” and Ariane was the surprise champion.  Jamie was overconfident and therefore totally pissed because the dish was her idea, her concept, her secret ingredient (vadouvan), and she was team leader.  While I think she could have been a bit more gracious, she did get screwed. 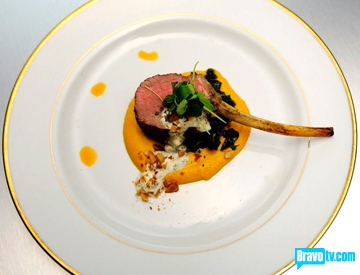 The winning dish was lamb marinated in french and curry spices, served over vadouvan carrot puree, and kale.  While Ms. S&C prefers red wine with lamb, she just doesn’t love it with Indian spices.  She’s open to it, but has never found the right match.  Please send her suggestions if you have ‘em.  Instead, she may choose an Alsatian white wine (Pinot Gris or Riesling) for the pairing.  Sweet, but dry, she thinks it compliments the complex Indian flavors nicely.

PS – Fabio update: We are still swooning.  How about the high praise he bestowed on Tom Colicchio, in his charming broken English?  “Tom come in the room make me nervous.  Colicchio for me is like if you are the priest and there is the pope in the room.”   Yeah, he’s adorable.

This entry was posted in wine and tagged top chef drink pairing. Bookmark the permalink.