It is a pretty simple formula: Beer + Ice Cream = My new favorite dessert. 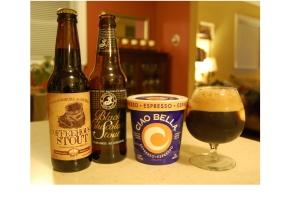 Ms. S&C isn’t a fan of root beer, but given the amount of craft beer consumed in her household, she can’t believe she hasn’t tried this dessert cocktail before. Her stout beers of choice for this heady concoction include: Brooklyn Brewery’s Black Chocolate Stout and Williamsburg Alewerk’s Coffeehouse Stout. Both beers are strong with roasted malt and well-suited for coffee flavored ice cream (or gelato!).