Five designers remain on Project Runway, and last week’s episode was a bit of a circus. Circus, as in Ringling Bros. and Barnum & Bailey, the greatest show on earth, circus. Ringmaster himself, Tim Gunn, tried to carefully point out that the challenge was about creating fashion inspired by the circus, not a circus costume. It seemed most of the designers, with the exception of the one who won, ignored that distinction.

I thought all the designs were a complete sideshow compared to Emilio‘s glamorous striped and polka dot gown. I love the mixture of prints, and it was perfectly tailored, totally flattering – a definite show stopper. 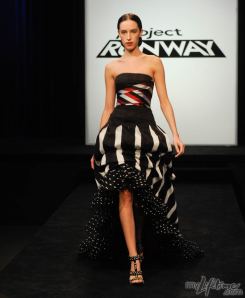 For the shoe pairing, I really like the studded t-straps Emilio paired with the dress. Sticking with the edgy chic look, how about these studded platform Louboutins? Love the hint of the red from the signature sole. Another option, slightly lesser priced, are these tiny-studded strappy sandals from Nordstrom.

One response to “Circus act”