The Quickfire Challenge had the chefs cooking our popular local treasure: blue crabs. Ed won the challenge with his dish of jumbo lump crab, thai basil, mango and cucumber. Considering I’ve picked crabs for the past *three* weekends straight, I tend to agree with local boy Tim’s philosophy: you don’t need to add a lot of flavors to blue crabs — the crab can shine on its own. But, I also don’t think anyone was planning to throw a half dozen crabs, covered in Old Bay, in front of Padma with a beer, a mallet, and some hushpuppies (I’d be in heaven). 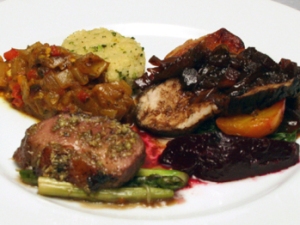 The Top Chef challenge was family style fare, but turn your focus to Kenny’s Hot and Sour Curried Eggplant with Peppers & Carrot Tops

For the Top Chef Drink Pairing: Virginia is for Viognier, not lovers. In a Washington Post article last year, Dave McIntyre reported that Viognier is very popular among Virginia vintners because the grapes are suited to this climate, and can remain balanced because it tolerates the heat and humidity (apparently the thick skin and growing in loose clusters makes it resistant to rot in the humid climate).

The wine is described as nuanced: lush and opulent with exuberant fruit, but also “austere and subtle in the classic fashion of the wines of Condrieu, Viognier’s homeland in France’s Rhone Valley.”  The only Virginia Viognier I can recall buying was a bottle from the Tarara Winery in Loudoun County, Va. I think the richness and slight sweetness of the Viognier would be a good match for the spicy curry in Kenny’s eggplant dish.

This entry was posted in cocktail-related, wine and tagged top chef drink pairing. Bookmark the permalink.