Posted on February 28, 2011 by msshoescocktails | 4 comments 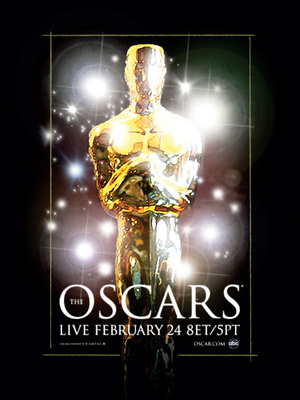 END_OF_DOCUMENT_TOKEN_TO_BE_REPLACED

We’re live blogging the 82nd Academy Awards! Ms. S&C has just settled in at a friend’s Oscar party and can’t wait to check out the red carpet fashion.

Maggie Gyllenhaal and Demi Moore have arrived! They are two stunning brunettes. I like Maggie’s printed dress, but it seems she should have gone more glamorous since she’s a nominee.

Meryl Streep?!?! Yes, you are so classy, but you don’t seem dressed up enough? Maybe by nomination 16, it’s nothing special?

Ms. S&C is a bit disappointed. The usually reliable Kate Winslet is in a two-piece-looking-gown that looks like the two pieces don’t belong. Charlize Theron is in a dress that looks like flowers are grabbing her boobs. What’s going on on the red carpet?

I want a better look at Sarah Jessica Parker’s jeweled frock. I think it has potential. The night is redeemed! Cameron Diaz comes through with a heavily jeweled gown. Love the longer locks too.

All the supporting actress nominees look good together. I like Maggie’s dress a lot more now — tie dye is back people.

Sandra Bullock looks the best she’s looked this whole awards season. The sleek long hair, the red lips, the glistening lace dress. Well down, Sandra. You look like a leading actress Oscar winner [Update: and you are! Loved your speech.].

You’ll either love or hate Sarah Jessica Parker’s yellow gown. Mixed reviews at this party. I’m a fan of the silver-y accessories, including the sparkly eye shadow.

Miley Cyrus wins for “most improved” look. She needs to work on her posture, but she looks a thousand times better than last year.

Now, on to the show… 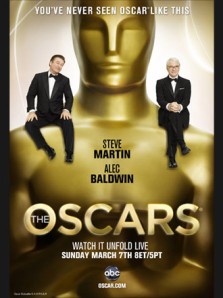 Ms. S&C didn’t see any of the celebrities’ shoes, didn’t have any cocktails,
but enjoys blogging about Oscar fashion even if only semi-S&C-related.

Neil Patrick Harris, that’s quite a jacket. What are you doing here? This opening is very Las Vegas. I don’t hate it.

The funny guys arrive. “Host cracked joke about Meryl Streep” is on the party bingo. Jokes falling flat is not, and there have been a few of those already.

Now, here’s when we can get a good look at these dresses…

Penelope Cruz is presenting best supporting actor, and her ruby dress looks much better under these lights. But, she’s always been on my top five girl crush list.

Tina Fey is also on my girl crush list. Her dress is not on any favorite list. Not her most flattering look.

Zoe Saldana’s dress is causing quite a stir at this party. Bottom looks like a shower puff, or something equally strange.

Queen Latifah is looking spectacular in her lavender gown.

Last year winter white was a popular choice. It is royal blue this year. Mo’nique is wearing it, and wins for best supporting actress. Or, maybe it is ruby red? That’s the color for Sigourney, Penelope and Vera.

Someone get Kristen Stewart some accessories!

Don’t love Sandra Bullock’s dress as much as I first thought, but her make-up is impeccable.

Ms. S&C is gonna have to start wrapping things up. This Oscar-watching-crowd gives this year’s show a big fail. The show was disjointed (strange tribute to horror films, the complete disaster also known as the interpretative dance segment), the two hosts had more bad jokes than good, and you know the fashion was disappointing when you poll the crowd and there’s more people on the worst dressed list than the best dressed one (and no one here can really agree on the best).

Ms. S&C’s best dressed list includes Sarah Jessica Parker, because she isn’t afraid to do something different than everyone else, and Demi Moore, because the peachy color of her well-fitted, yet flowy, gown suits her so well.

Ms. S&C wants to know: What were your favorite Oscar moments? Who did you think was divine? Who was a disaster?