The past two Thanksgivings for Ms. S&C have been meat free. This means no turkey, no Virginia ham, and when she’s visiting family in Southwestern Va., it also means no gravy and no stuffing. Some of you may be thinking “What’s left to eat?” Trust me, you can have a rich and hearty vegetarian (or vegan) Thanksgiving dinner that’s reminiscent of the one you know and love. (And it may be one you feel better about eating.)

Start off with a cocktail we’re calling the Old Fashioned Pilgrim. Adapted from Imbibe Magazine‘s Maple-Cranberry Bourbon Smashed, we used the same ingredients as those in our cranberry sauce (yes, the same sauce that’s served alongside the tofurkey).

The instructions are easy: add a tablespoon of the cranberry sauce to two and a half ounces of bourbon (we used Buffalo Trace). Stir well. Fill glass with ice and garnish with an orange twist. Enjoy a sweet and warming seasonal variation of a classic drink. 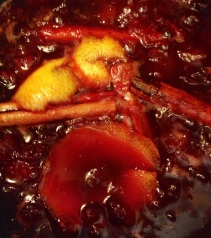 The Old Fashioned Pilgrim is a lot like the classic Old Fashioned but made with fresh cranberries, orange, agave nectar, and cinnamon

Enjoy this beverage while you’re putting the finishing touches on this delicious all vegetarian Thanksgiving dinner.

If you’re not used to eating a protein other than turkey and sausage, the taste will surely be different (and the tofurkey on its own could have used a little gravy), but the spicy stuffing and tart citrusy cranberry sauce are more than enough to give this all veggie dinner a lot of flavor.